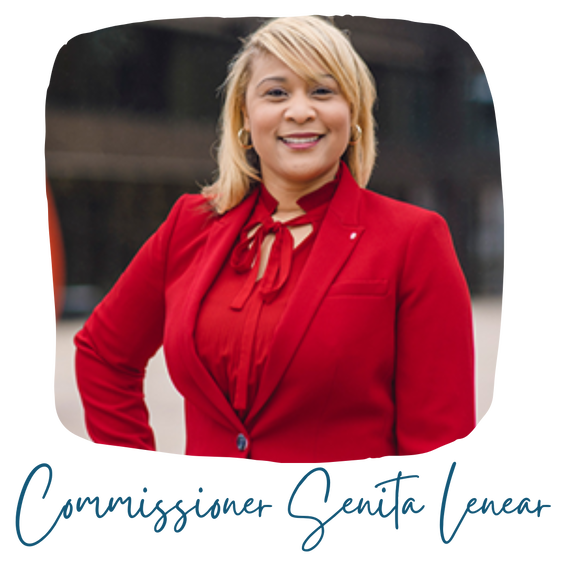 Commissioner Lenear has more than 20 years of business experience, which includes a variety of leadership positions at the largest healthcare insurance provider in the state of Michigan and co-owning an event planning and business consulting firm. She was appointed to the Grand Rapids Public Schools Board of Education in October 2007. Two years later, she was elected by Grand Rapids citizens to serve a four-year term on the GRPS Board of Education.

Senita was elected as a Third Ward City Commissioner in August 2013, making history, she joined the City Commission in January 2014 as the first African-American women elected to this office. Since joining the Commission, she has served as chairwoman of the Mayor's Safe Alliance for Everyone (SAFE) Task Force, which developed a violence-reduction strategy for the City. She also served on the Great Housing Strategies committee, along with Commissioners Ruth Kelly and Elias Lumpkins, which provided recommendations for addressing our community's housing needs. Additionally, she served on the Kent County's Friend of the Court and Lead Taskforces, both were designed to research and making recommendations that positively impacted the community and elevated the services being provided. Most recently, Commissioner Lenear launched a workgroup to study human trafficking and has been journeying with community members and organizations to bring awareness to this growing problem in our city.
​
Commissioner Lenear has been honored with a number of community awards, including Cornerstone University's 2014 Alumna of the Year, GRCC's Giants Award, GRBJ 50 Most Influential Women, YWCA Tribute Award, Zeta Phi Beta Woman of the Year and NAACP Presidential and Legacy awards, among many others.